Midnight Oil are back and touring the globe. Looking for something else I came across this:

From my unpublished letter to Village Voice, March 21, 1990.

In her generally favorable review of Midnight Oil’s Blue Sky Mine (March 13) Karen Schoemer complains that the band sounds impersonal. By this she means that no song on the album touched her at a one-to-one level as did U2’s “With or Without You.” I doubt that Midnight Oil aims for the global significance that Schoemer attributes to U2, but in any case should Americans expect such communion with a band whose persona is rooted in Australian culture. Some of Schoemer’s feelings of impersonality may stem from her lack of knowledge of that culture. For instance, Midnight Oil toured with aboriginal bands and recorded Diesel and Dust to call attention to white Australia’s mistreatment of the indigenous population not to promote “racial harmony,” and “Blue Sky Mine” is not a call for “underprivileged workers” to stand up for their rights but a song in support of the action already taken by these highly unionized workers to win compensation for asbestos poisoning from the large corporation that operates the mine. 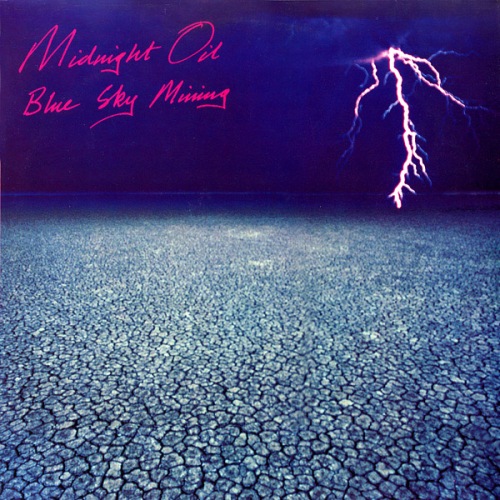 Further, when Schoemer quotes Garrett’s lines “One policy”, “One passion” she misses the irony of the song that also says “Who wants to please everyone, Who says it can be done … So don’t call me that tune, I will walk away.”

Finally, two songs on the album “Stars of Warburton” and “Shakers and Movers” offer the ambivalence of Garrett and Rob Hirst to their international success, and the demand for such success that Australians place on their heroes before acknowledging their legitimacy. When Hirst writes “I couldn’t believe the stars of Warburton were waiting for me” and Garrett affirms “I can’t live without your love” they look to Australia, for all its faults, for support and inspiration. For Australians this is communication at the one-to-one level. To ask for more is to ask for a bland homogeneous international culture.

It has been some time since I blogged here. I have been writing a book (two actually). I have set up a blog for my forthcoming Superman book. Take a look here:  https://supermanthepersistenceofanamericanicon.wordpress.com/

Last week I attended this conference at the British Library. The conference was held in conjunction with an exhibition there entitled Comics Unmasked: Art and Anarchy in the UK. Held almost 60 years after the National Union of Teachers anti-comic book exhibition at their headquarters, which is literally two minutes around the corner from the King’s Cross address of the British Library this conference and exhibition seemed special to many because it lent some of the Library’s prestige to comics. 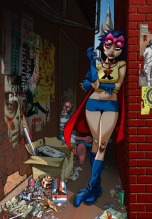 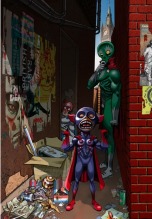 Indeed the exhibition is on track to being the Library’s most popular exhibition ever (I think this means since it was split from the British Museum). Due to an illness in the family exhibition organiser and conference mainstay Paul Gravett was a fleeting presence on the opening day and alas not able to attend afterwards. Also absent were Chris Murray, Lawrence Grove, and Matthew Screech the latter two being more on the bande dessinee side. But there were many regulars there like Roger Sabin, Nichola Streeten, Nina Mickwitz, Simon Grennan, Laurike in t’Veld, Ian Hague and of course conference organisers  Damon Herd, Julia Round, Joan Ormond, David Huxley. The key notes from Pascal Lefevre and Scott Buktaman were riveting. The evening conversation on Day One with Posy Simmonds and Steve Bell revealed one of the most the subtle English cartoonists and one of the most blunt as a fine match and a nice balance for each other.  On Day 2 Mike Carey, Dave Baillie and Mike Perkins took the audience through their careers with some emphasis on their encounters with the American big 2 DC and Marvel. Other highlights included catching up with and hearing the papers of friends like Bart Beaty, Ben Woo, Lim Cheng Tju, Paul Williams, and Michaela Precup. One of the things that stood out for me most was that the conference was indeed international. Manga received a lot of attention and I was fortunate to chair a panel with four excellent papers including one from the very busy Fusami Ogi who previously has organised small scale conferences on women’s manga in Singapore, Hanoi, and Hong Kong with another coming up in Sydney. Next year  the conference will be in Paris in conjunction with the Bande Dessinee Socirty’s conference and I am looking forward to that.

Oh and if you have the Sequential app there is a free 150 page catalogue of sorts from the British Library exhibition you can download.

This past week I attended the Billy Ireland Library and Museum Cartoon Festival in Columbus, Ohio. The event marked the opening of a brand new facility that provides excellent research facilities, display space, and auditoriums. The Festival featured many greats like Jeff Smith, Paul Pope, Stephan Pastis, Matt Bors, and the Brothers Hernandez. The first two days of the Festival consisted of an academic conference. All together it was a gathering of the Comics Nation. In July I attended a comics conference in Glasgow. At that meeting a young scholar unselfconsciously called comics studies a field. At that moment I realized comics studies had indeed become a field. But last week I saw a major part of that field in action and recognizing itself as having reached a point of maturity. Not all papers were to my taste, but that is the way it goes at this things. Others were unexpectedly excellent. The over all joy people were having just being at the gathering was palpable. The day after the event ended Facebook is lighting up with folks commenting what an amazing event it was and their pleasure at putting faces to names they have long known. I had that experience too. I had many other fabulous moments in the week, and those will be stories I tell for years, but I think this may have been the moment when comics scholars found themselves as a field. To be sure there are already disputes between scholars, and these will only increase, but in this magical moment everyone was just so happy to be there and see the existence of the field. Lucy Shelton Caswell, Jared Gardner, Jenny Robb, and Caitlin McGurk all should be aglow at what they have accomplished. And Lucy who over 30 years patiently built a collection that required a building you are amazing.

I promised my mother on her 89th birthday that I would take some of her ashes to London. My mother spent three years in London: a year in about 1933, a year in 1965 and a year in 1974. She long felt a connection to the city particularly to the areas around Muswell Hill and Highgate Village. She used to enjoy a beer at The Flask in Highgate (not the pub of the same name in Hampstead) and The Spaniards Inn in Hampstead.

So in April I did as I promised. As I told my sister my mum had one last great journey. I took a portion of her ashes with me from Sydney (she had already journeyed up from Melbourne) to Singapore where she stayed for six months. She had always wanted to come to Singapore where her Great Uncle spent some time as a guest of the Japanese during WWII. She was meant to be here in 1961 but that did not pan out. Then she flew on the A380 to London and took the Heathrow Express to Paddington. All firsts. And then by underground and the overground (which she last rode when it was a British Rail train in 1965) we went to Richmond. A walk upstream towards Hampton Court Palace and I found a nice place for her to enter the river. In she went and I scrambled back up the bank and started walking back towards the station.

The container she was in is meant to dissolve within a few minutes of hitting water and that is what happened in the ocean in Sydney in September. But 10 minutes into my walk back I saw her floating down the river.

So at the end of her journey she took a nice jaunty ride down the river. Then a duck or some sort of water fowl took some interest but then abandoned the pecking and looked elsewhere.

The last I saw the package was breaking up and the ashes no doubt shortly floated into the river and began their long journey to the English Channel. I spent a good part of the day thinking about my mother’s London years.